I wanted to share a few tidbits of a weekend spent in Rockingham County. My wife and I had driven out early Saturday morning to meet up with friends and prepare for a wedding later that evening. As always, my wheels began to spin, devising ways to get out into the woods for a turn, hiking or fishing. I thought of cold water in thin streams running down from the eastern edge of the Appalachians, of getting lost somewhere in Shenandoah National Park, of breathing mountain air again.

The weather hadn’t been conducive the week prior. It had been hot, dry, and the water levels were low. The first stream I reached (the pencil-thin blue line on Google maps) was bone dry before I’d even trekked up toward the Park’s higher elevations. Not a good sign. Another half-hidden dirt road led farther into the shade of the woods and another stream, this one free flowing and cool, but no more than a few feet wide and inches deep in most places. With the tree cover, there was no room to cast. I just let out the line a bit to pull downstream and hoped for the best. I splashed around for an hour, feeling silly, eventually deciding to return to the car and head back to the Shenandoah River crossing I’d sited five or so miles back. 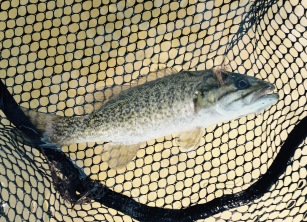 It was here that I would spend the rest of my time that afternoon as well as a few hours early the next morning. There’d been plenty of room to cast and several feet of depth to walk around in my new chest waders. I stepped carefully amongst the rocks, easing out from the shade of the bridge and experimenting with a half dozen flies, not really knowing what I was fishing for. By the end of it, I’d hooked a few adolescent smallmouth, a green sunfish, and, somehow, a dragonfly. Not too momentous as far as landing the Big One goes, but a satisfying day—a river day—and that was good enough for me.