Recently published on Longreads, my essay about parenthood, camping, and how neither is an exact science: 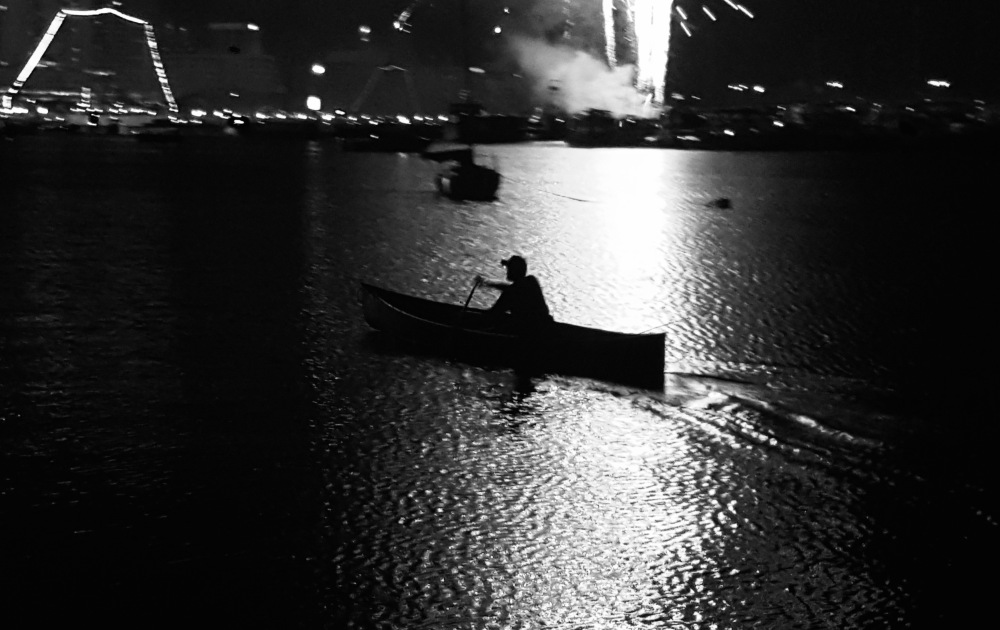 I live in Virginia, the southeastern corner, the heart of the military-industrial complex. It’s not a very wild place, at least not in the traditional sense. What it does have is access to waterways—brackish, sweet, and salt—lots of coastline, and low-lying wetlands. It’s nice if you have a canoe or kayak (I do) though not so much for those of us bound to a car.

There are a few untrodden places close to home, semi-wild because they’re marked by an inland expanse of water which, due either to geography or downright ugliness, hasn’t been commercialized yet. These include Merchants Millpond Park, which (supposedly) denotes the northernmost reach of the American alligator, and the Great Dismal Swamp which, despite its uninviting name, is one of the largest tracts of wild land in the eastern US. Paddling through the swamp’s canals en route to lake Drummond is like slicing through coffee; the water is so full of tannic acid from the trees that sailors used to bottle it for long voyages, the tannins keeping the bacteria at bay.

I’ve just returned from a camping trip out at Drummond with the family—a single overnight by canoe, and a bit of kayaking out on the Elizabeth River near my home. As a result, I’ve been thinking a lot lately about the experience of going out on the water by paddle.

The canoe and kayaks I now have, sheathed in plastic and Royalex, seem a far cry from their progenitors—boats that were once essential for the transport, hunting, and outright survival of native peoples in North America, northern Europe, and Australia. Canoes once constructed from nearly every part of the tree—wooden framework, bark skin, root lashings, and resin sealant. The simpler dugout canoes from a single tree trunk are in fact where the craft got its name, from the Carib word “kenu.”

The kayak, on the other hand, was unique to the indigenous people of the North American arctic and sub-arctic, modern day Alaska, and slices of Canada, parts still inhabited and, in some ways, locally governed by their longtime residents—the Inuit, the Yup’ik, and Aleut.

In my contemporary way, I can’t help but liken my own watercraft to those modes of transport infinitely more familiar to me and my tribe—the car. I often think of the canoe as an SUV—bulky, practical, suited to carrying passengers. By design it’s meant to get people and their stuff from point A to point B. If the 18th century were now and all those rivers and lakes in the Canadian wilderness were somehow part of the Eisenhower Interstate System, I’m pretty sure the Voyageurs would be striking in their Suburbans, fur and stocking caps trailing from the rear hatch.

The kayak, on the other hand, is more akin to a sports car, of which there are many kinds. It is (usually) a one-man job, small, fast, easy to get in and out of the water, but not terribly practical for fishing, camping, or passenger carrying. I ought to make an exception for fishing, both out of respect for the Hobie-owners among us and because of, admittedly, my own clumsy angling from the seat of my Old Town Otter. That said, you don’t often see deer hunters taking their Corvettes into the National Forest, but to each his own.

When I’m on the water, I often think of little else. It can be its own form of meditation, one which usually comes on without my having to force it or think about it. It’s not perfect and it doesn’t happen all the time, but often enough that I notice (and I don’t consciously think about it until after the fact). This is the nature of non-thinking and of paddling.

Canoeing or kayaking on open water is not without its frustrations, either. Being out there in a 16-foot canoe with its wide sides exposed to the wind and a one-man engine, I don’t often find myself lost in self-reflection. When I turn, I turn too much. When I drive it into the wind, sometimes it just doesn’t go. I once broke a cedar paddle I’d carved this way. It’s easier to be out in these conditions in the kayak, but maybe that’s just the nature of the kayak too. It’s a small, easy thing to drive and to maneuver.

I’ve thought of the times I’ve been caught out in rain storms with my son—twice now. He’s only four but he remembers each time distinctly, though most of the details he repeats are more focused on a warm blanket and a treat with his mother post-rescue than being wet and cold with his father while we (I) paddle furiously back to shore. Though framed by mishap, they’re memories I hope he’ll hold onto as he gets older, not to dissuade him from seeking his own adventure out there in the blue, green, and gray.

My own memories serve me well. There was the summer day on Lake Como with my father, paddling around in a rented Grumman which seemed to reflect the sun back at us from below. There was the day trip down the Brandywine River during summer camp, a long trip through slow water during which I discovered two things: the counselor who paddled my boat was a chain-smoker and, two, how easy it was to defecate inconspicuously while swimming in cloudy water. At camp the next year we found ourselves hugging the shoreline of an ocean inlet, putzing around on sit-on-top kayaks. The fun ended when I accidentally clocked a girl—on whom I’d had a crush—in the head with my kayak bow while she tread water.

My first big purchase after graduating from college was a kayak. It was cheap, small, red—a temptation too powerful to pass up. I saw it propped on a rack at Dick’s Sporting Goods during my lunch break and I returned just before closing later that night and bought the thing for $250. It was October and they’d been clearing them out to make room for winter gear. I had to spend another $100 or so on a paddle, spray skirt, and foam blocks and rope to be able to carry the damn thing on the roof of my car (this was all clearly an afterthought).

I spent the next several weeks, far into the cold season, finding places to launch the kayak and go paddling. At the time, I lived in southwest Virginia and had little trouble finding moving water. I took several excursions into the New and Roanoke Rivers, and a few backcountry creeks whose names I’ve long since forgotten.

While I couldn’t pinpoint it then, that kayak stoked a craving for exploration, a desire for immersion into a wilderness that largely did not exist anywhere nearby. But that was ten years ago and at times, it seems, a lifetime. Things are slower going now. I’ve spent several intervening years without setting foot in a canoe or kayak. But living here in the “Tidewater” area of Virginia, my proximity to water in motion seems to have made it inevitable.

Even now, with the lights and sirens and late night music cascading from the shoreline, I still paddle out just for the hell of it. Amidst the rumble of the tugs and the echoes of the shipyard, I am silent.

When the wind is at my back, sometimes I look to the side and perceive that, relative to the water, I’m sitting still. If I add a little distance to my perspective I usually find, in fact, that I’m moving rather quickly. Perspective can do that, and it’s usually good. But when the going is slow, when I’m driving into the wind and the waves, I can look behind and see the trailing ‘V’ of my wake spread thin and disappear, the loose ends carved by vortices which slow and weaken. Memory is subject to the same laws, I think. There are the traces of the paddle blade meeting those of the stern, the intersection of desire and reality. Look far enough behind you and all but the heaviest, clumsiest strokes are perceptible. The small ones don’t last and the big ones do until they’re all swept away in the continuous roll of the water.

Newly published in Sierra magazine, my piece about hiking the proposed path of the Atlantic Coast Pipeline through Virginia’s National Forest: